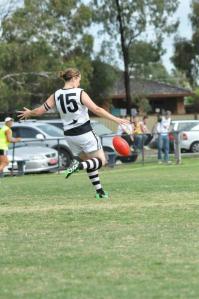 Louise “LG” Grant will join her great mates Lou Wotton and Brooke Fox in the 150 club this weekend when she lines up against St Kilda at East Burwood Reserve.  In her typical understated style LG isn’t wanting to make a big deal of things although she did say “I’d definitely like to win!”  After starting her football in a forward pocket in 2000 she soon developed into a classy on-baller with skill, knowledge and fierce determination.  She is a Life Member of the Devils and has previously been named Players Player and Best Club Person.  Away from the Devils she has pulled on the Big V at two national carnivals and has played for Vitoria Metro on two occasions.  As a Devil, many of her games have been spent at the feet of ruck Lou Wotton who said “She is one of the smartest footballers I know.  She is always thinking two or three steps ahead and her instructional talk is second to none.”  Many of those who have played alongside LG say they are a better player when she is out there, which is one of the greatest complements a footballer can receive. 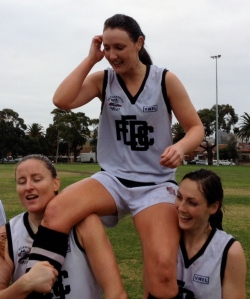 Katie “Cashews” Eshuys brought up her 100th game for the Devils with a resounding win against St Kilda last Sunday.  A member of the Devils Team of the Decade in 2008 she is a consistent performer who uses her smarts to find plenty of the ball while patrolling the wing.  Head to the Milestone gallery to check out all the pictures. 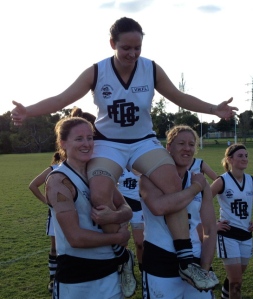 Robbie Foster joined the 100 club yesterday when she ran out with the Seniors in their round 6 clash against Darebin.  Robbie started her footballing days with Heidelberg in 2004 before her desire to play at the top level prompted her move to the Devils in 2008. A serious neck injury saw her sidelined for much of the 2009/2010 seasons but she has been back to her best in recent times owning the wing with her pace and run. Congratulations Robbie.

Check out more pictures in the Milestones gallery.

Congratulations to Kathy “Macca” McBride who played her 100th game when she ran out as captain of the Reserves against Berwick on Sunday.  Although the Devils were unable to secure a win, Macca was named Best on Ground.  In a signature performance she willed herself to the contest time and time again and put her “falcon” smother technique to good use.  Our only premiership captain, having lead the Reserves to glory in 2008, her Best and Fairest win last year showed she is still in her prime.

Check out more pictures in the Milestones gallery. 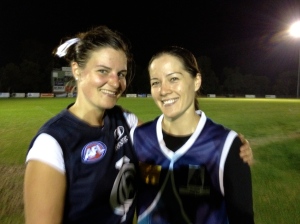 Kathy “Macca” McBride will reach the 100 club this Sunday when she leads the Reserves side out while Louise “Spider” Spindler will notch up 50 games when she runs out with the Seniors.  Congratulations girls and good luck for Sunday!

A huge shout out and thank you to the team at DAEMCO for sponsoring Morgan Cocks for the 2022 season. We are looking forward to seeing a number of DAEMCO supporters on the weekend. 👏
After a long waited return the wonderful Kara Henderson is back in the black and white.
Our latest recruit, son of Mully, our new assistant reserves coach.
Ready to fire up forward again this weekend.
A big weekend ahead as the Devils are back home to take on Vermont & Mt Evelyn at home. 😈
Taylah is an absolute fighter for the footy. New to the devils in 2022, she has slipped into our backline with ease. A hard nut who we are so happy to see in the black & white.
Loading Comments...